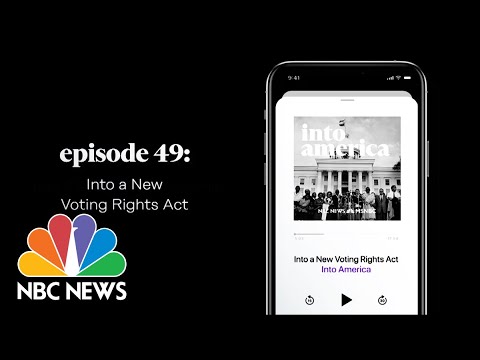 As a young man, Lewis’ was almost cut short as he led a protest for voting rights in Selma, Alabama. That day — March 7, 1965 — became known as Bloody Sunday, as state troopers attacked the protesters with horses and billy clubs. Lewis was badly beaten, and his skull was fractured.
Broadcast images of Bloody Sunday put pressure on Congress and then-President Lyndon Johnson to pass the Voting Rights Act. The 1965 VRA eliminated racist voting practices such as poll taxes and literacy tests. It also put states and districts with especially discriminatory histories under federal oversight. But in 2013, the Supreme Court struck down key provisions of the VRA, undercutting its effectiveness.
Activists and political organizers have been working to ensure that this rollback of the VRA does not keep Black Americans from being able to cast their ballots, but voter suppression has still been a major concern throughout the country. On this episode of Into America, Trymaine Lee talks to political strategist LaTosha Brown, co-founder of the Black Voters Matter Fund, about the ongoing struggle for full voting rights. https://link.chtbl.com/obvkRMCh?sid=ep49» Subscribe to NBC News: http://nbcnews.to/SubscribeToNBC
» Watch more NBC video: http://bit.ly/MoreNBCNews