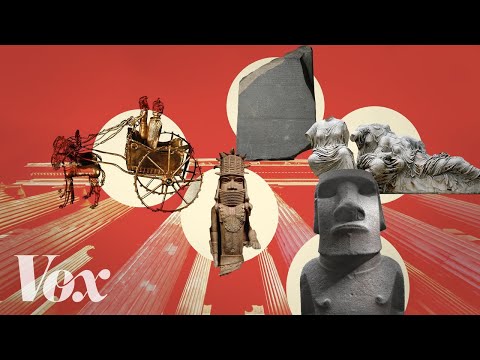 And so far, it isn’t giving them back.

Some of the world’s greatest cultural and historical treasures are housed in London’s British Museum, and a significant number of them were taken during Britain’s centuries-long imperial rule. In recent years, many of the countries missing their cultural heritage have been asking for some of these items back.

Benin City in Nigeria is one of those places. They’ve been calling for the return of the Benin Bronzes, hundreds of artifacts looted in 1897 when British soldiers embarked a punitive expedition to Benin. Many are now housed in the British Museum.

And it’s just the beginning. As the world reckons with the damage inflicted during Europe’s colonial global takeover, the calls for these items to be returned are getting louder and louder.

To dig deeper into the 1897 Benin Punitive Expedition and the Benin Bronzes check out this book by Staffan Lunden:
https://www.academia.edu/28886529/Displaying_Loot_The_Benin_objects_and_the_British_Museum

For more information on the two Benin Bronzes returned by Mark Walker, check out this piece by The Guardian:
https://www.theguardian.com/uk-news/2019/dec/17/soldiers-grandson-to-return-items-looted-from-benin-city-nigeria

Here are some links to learn more about the other contested items on the British Museum’s “Don’t Miss List” we reference in the video:

Egypt called; it wants its Rosetta Stone back
https://www.npr.org/templates/story/story.php?storyId=131309154

Lastly, here is an opinion piece by prominent lawyer Geoffrey Robertson arguing why the pieces should be returned:
https://www.theguardian.com/world/2019/nov/04/british-museum-is-worlds-largest-receiver-of-stolen-goods-says-qc

And here is another opinion piece by author Tiffany Jenkins arguing why the pieces should stay in Western museums:
https://www.theguardian.com/culture/2018/nov/25/benin-bronzes-why-western-museums-should-keep-treasures

Vox.com is a news website that helps you cut through the noise and understand what’s really driving the events in the headlines. Check out http://www.vox.com.

Fisherman dies after being swept off rocks on Sydney’s northern beaches...