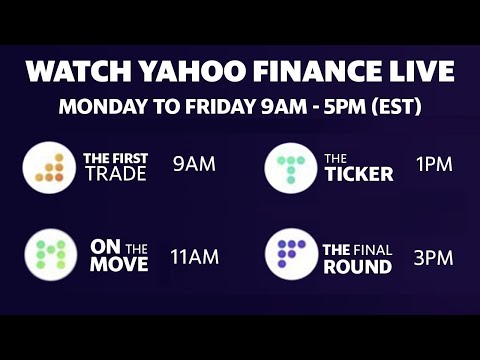 Get the latest up-to-the-minute continuous stock market coverage and big interviews in the world of finance every Monday–Friday from 9 am to 5pm (ET).
#YahooFinance #Stocks #coronaviruscovid19
The lineup:
9am – 11am: The First Trade
11am – 1pm: On The Move
1pm – 3pm: The Ticker
3pm – 5pm: The Final Round
#Stockmarket #coronavirus #YahooFinance

Stock futures rose Wednesday morning as investors awaited more updates on stimulus talks out of Washington and another batch of corporate earnings and economic data reports. During the regular session, the Nasdaq logged a fifth straight session of gains and closed at a record, and the S&P 500 and Dow rose for a third straight day. Gold topped $2,000 per ounce.

Shares of Moderna (MRNA) and CVS (CVS) each rose ahead of the opening bell, after each company topped expectations in second-quarter results. Health-care company CVS grew profit more than 50% over last year as costs in its health-care benefits unit fell. The company also raised its full-year profit guidance. Moderna’s revenue of $66 million was more than double consensus estimates, and the company said it remained on track to finish enrollment for its Phase 3 coronavirus vaccine trial in September.

Shares of Disney (DIS) also jumped in early trading, after the company reported mixed third-quarter results Tuesday evening but unexpectedly eked out an adjusted profit per share despite broad-based business disruptions due to the pandemic. In a move to begin rolling out its backlog of films not yet released in theaters, Disney said it would release its live-action “Mulan” starting Sept. 4 on Disney+, with the streaming platform now boasting 60.5 million global subscribers. Disney also plans to launch a new streaming service under its “Star” brand.

Wednesday also brought the first of several major economic data reports this week on the state of the labor market – and the print drastically missed expectations. The ADP National Employment Report showed private employers added back a net 167,000 payrolls in July, whereas consensus economists expected additions of 1.2 million. Private payrolls had increased by an upwardly revised 4.314 million in June.

However, the July report will also give a somewhat dated look at the job market in America, with the coronavirus pandemic and efforts to contain it still under way. Improvements in the labor market and in consumer health are expected to backslide in the absence of further stimulus measures from Congress.